For years, I've struggled with to-do lists. OmniFocus. Toodledo. Any.do. Producteev. Google's (GOOG) Tasks. You name it, I've tried it. Most often, it takes about a week before I give up and go back to using handwritten note cards, email and memory.

All that changed a month ago. That's when I first started using HabitRPG, which turns your to-do list into a game. Each task is part of a broader quest to gain experience, resources and "buffs" for improving the character that is you.

The Worthy Habits of a Stark of Winterfell 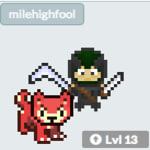 Think of it as Dungeons & Dragons for productivity seekers. Or if you prefer, "Game of Thrones," but instead of a pursuing the Iron Throne, your quest is to create a healthy and fulfilling life. That's my character to the left, a level 13 Rogue who hopes to find enough food to transform his red wolf cub into a fierce steed of the rugged North. Obviously my character is a Stark of Winterfell.

He'll grow and improve over time, but only if I remain focused. HabitRPG penalizes inaction as much as it rewards action. For example, if I don't get in at least 10 minutes of exercise time during the day, my character loses health. Lose enough, and I'll die in the game. By contrast, exceeding my target (i.e., conquering my to-do list) confers experience and gold, resources for furthering my character's equipment and skills.

Therein lies the secret to any good system: a careful balance between penalties and rewards encourages not just action, but consistent action. Maybe grounding these principles in the context of a fantasy role-playing game sounds silly to you. Fair enough; I know I'm a nerd. And yet I can't help but wonder how much better off we'd be -- how much more we'd have saved for retirement, for example -- if pursuing financial goals felt like a game rather than a chore. Ready to give it a try? Here are four mechanisms found in HabitRPG to help you start gamifying your financial life: Motley Fool contributor Tim Beyers owns shares of Google (A and C class). Find him on Twitter as @milehighfool. The Motley Fool recommends and owns shares of Google (A and C class). Try any of our newsletter services free for 30 days.