The Walt Disney Company (DIS), whose fiscal year ends Sept. 30, reported a 7 percent gain in fiscal fourth quarter revenue to $12.4 billion, and an 8 percent rise in yearly revenue to $48.8 billion over fiscal 2013. Profits were up too. The fourth quarter saw profits rise 7.5 percent or 86 cents a share to $1.6 billion, compared to the same period last year.

The Disney film division's outsized performance led the way to overall revenue and profits. The success of animated movie "Frozen" and Marvel movie "Guardians of the Galaxy" lifted movie revenue beyond expectations. Revenue from the Studio division was up 18 percent to $12.4 billion in the fiscal fourth quarter. Frozen, which became the highest grossing animated film ever, also generated merchandising revenue, which lifted up fourth quarter product sales in the consumer division by 7 percent to $1.1 billion.

The results were ahead of analysts' estimates, with the overall revenue number slightly better than expected. Despite that, Disney's stock fell slightly after the earnings report, although it has nearly doubled in price in the last two years.

Highlights
The table below shows the preliminary results and recent trends for key metrics such as revenues and net income (See complete table at the end of this report):

Companies sometimes focus on growing market share at the expense of profits. 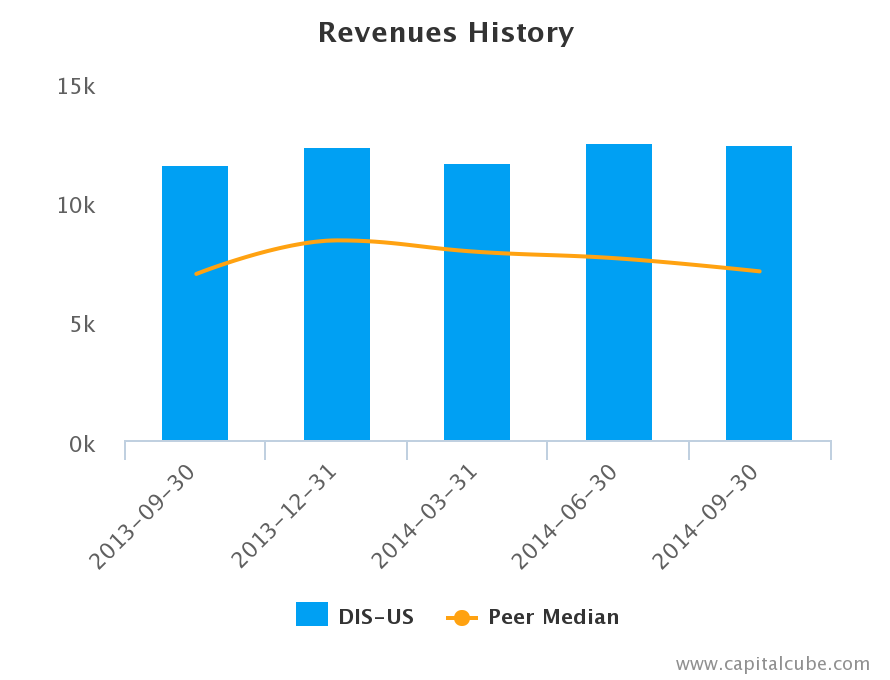 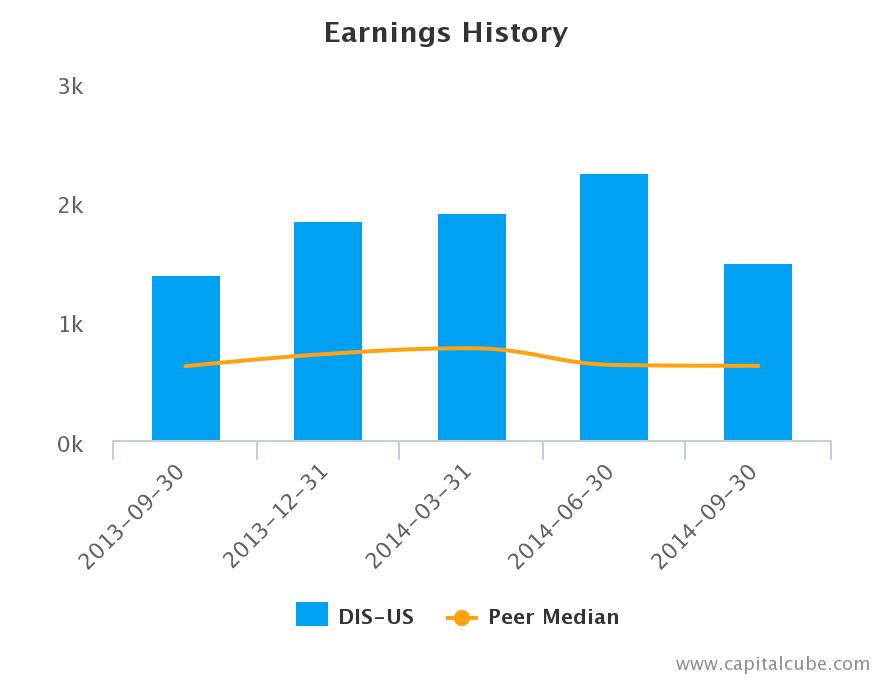 The Disney Company's 7.1 percent increase in revenue, compared to the same period last year, trailed its increase in earnings, which rose 7.5 percent. The company's performance this period and for its full fiscal year suggests a focus on boosting the bottom-line earnings. While the revenue performance could be even higher, it is important to note that Disney's revenue performance is among the best in its peer group thus far. (Also, for comparison purposes, revenues fell by -0.5 percent and earnings by -33.2 percent compared to the immediate last quarter.) 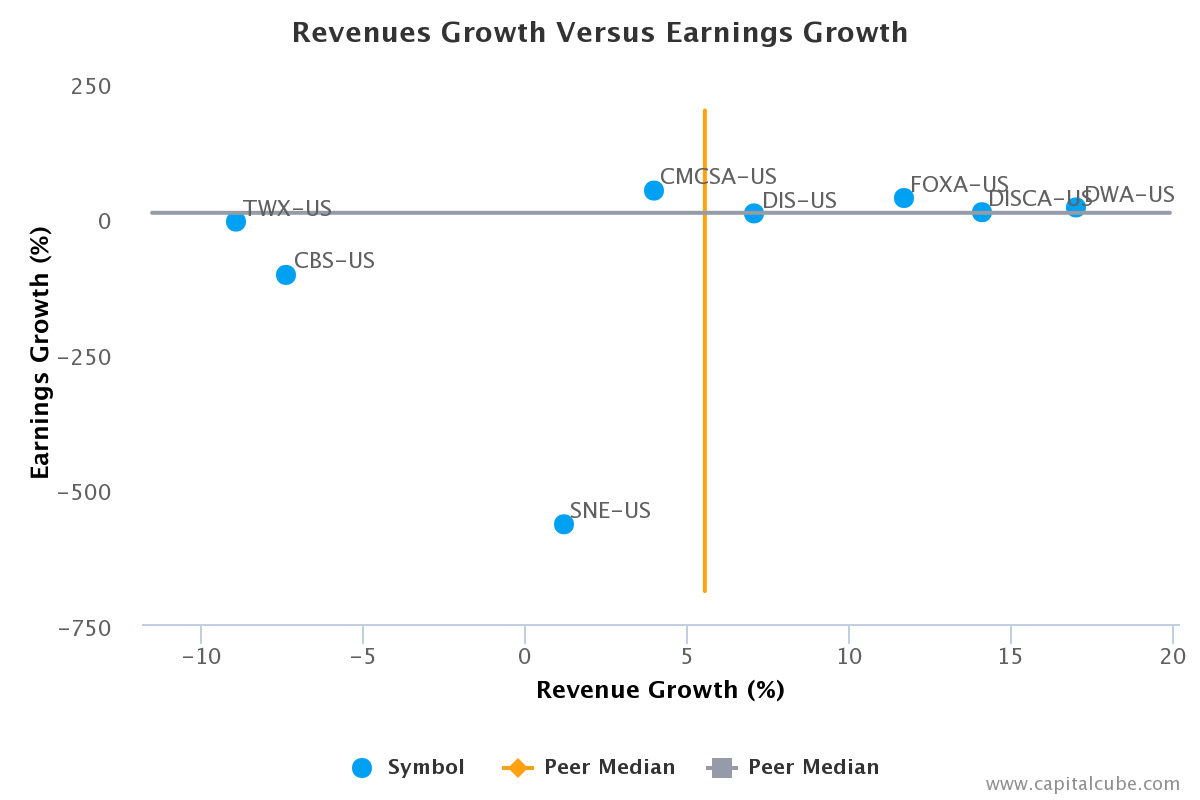 Companies sometimes sacrifice improvements in revenues and margins in order to extend better terms to customers and vendors. Capital Cube checks for such activity by comparing gross margin changes with any changes in working capital. If the gross margins improved without a worsening of working capital days, it is quite possible that the company's performance is a result of truly delivering in the marketplace and not simply an accounting prop. 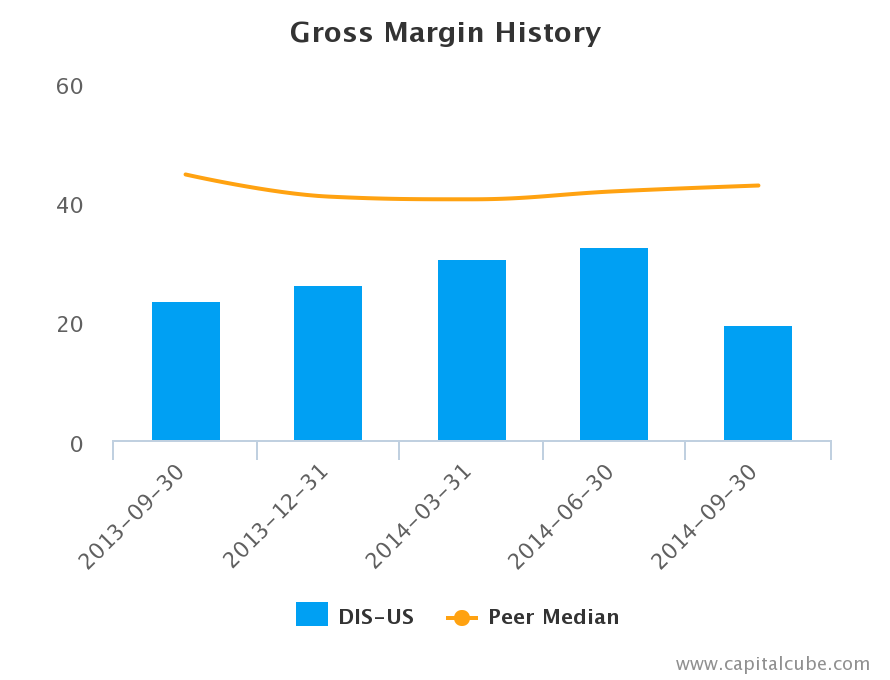 Disney's decline in gross margins is offset by some improvements on the balance sheet side. Working capital management shows progress. The company's working capital days have gone down to 5.8 from 18.2 for the same period last year, and suggest that the gross margin decline is not altogether bad. 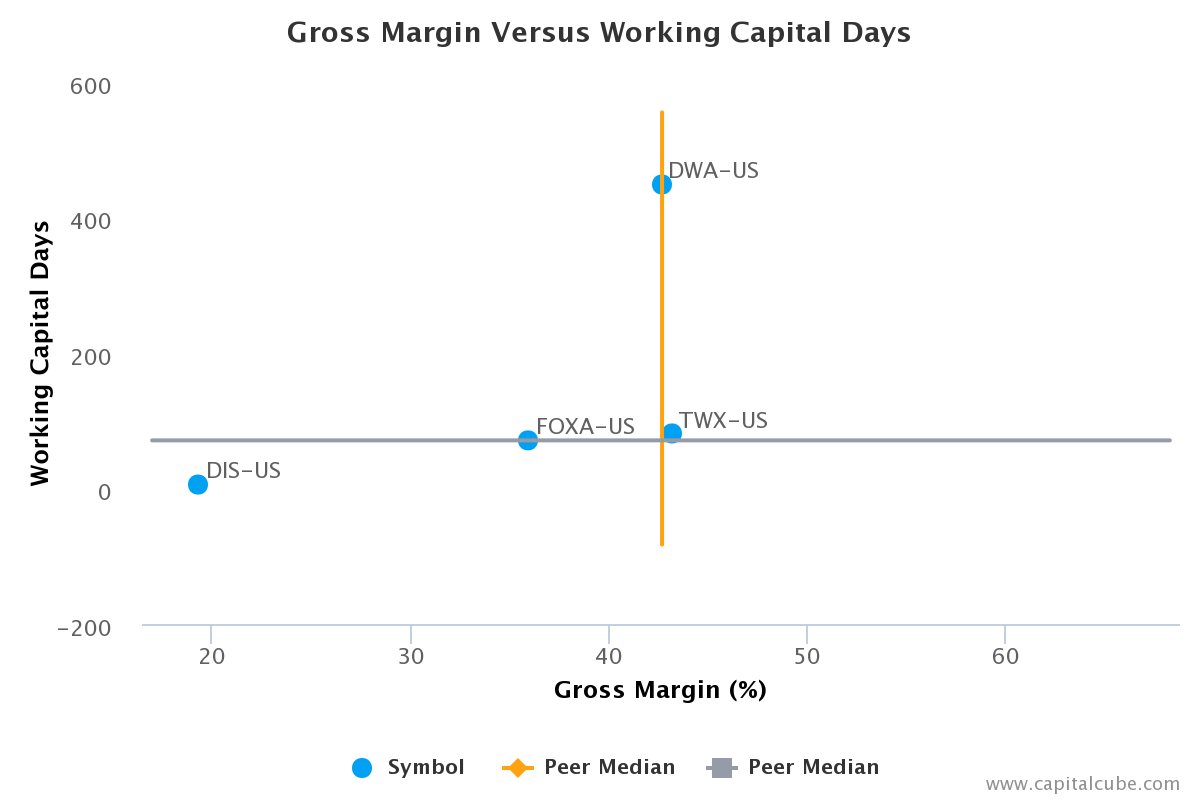 Companies often post earnings numbers that are influenced by non-cash activities, which may not be sustainable. One way to gauge the quality of the declared earnings number is to judge the deviation in earnings growth from the growth in operating cash flows. In general, an earnings growth rate that is superior to operating cash flow growth implies a higher proportion of non-operating or one-time activities. Such activities are typically not sustainable over long periods. 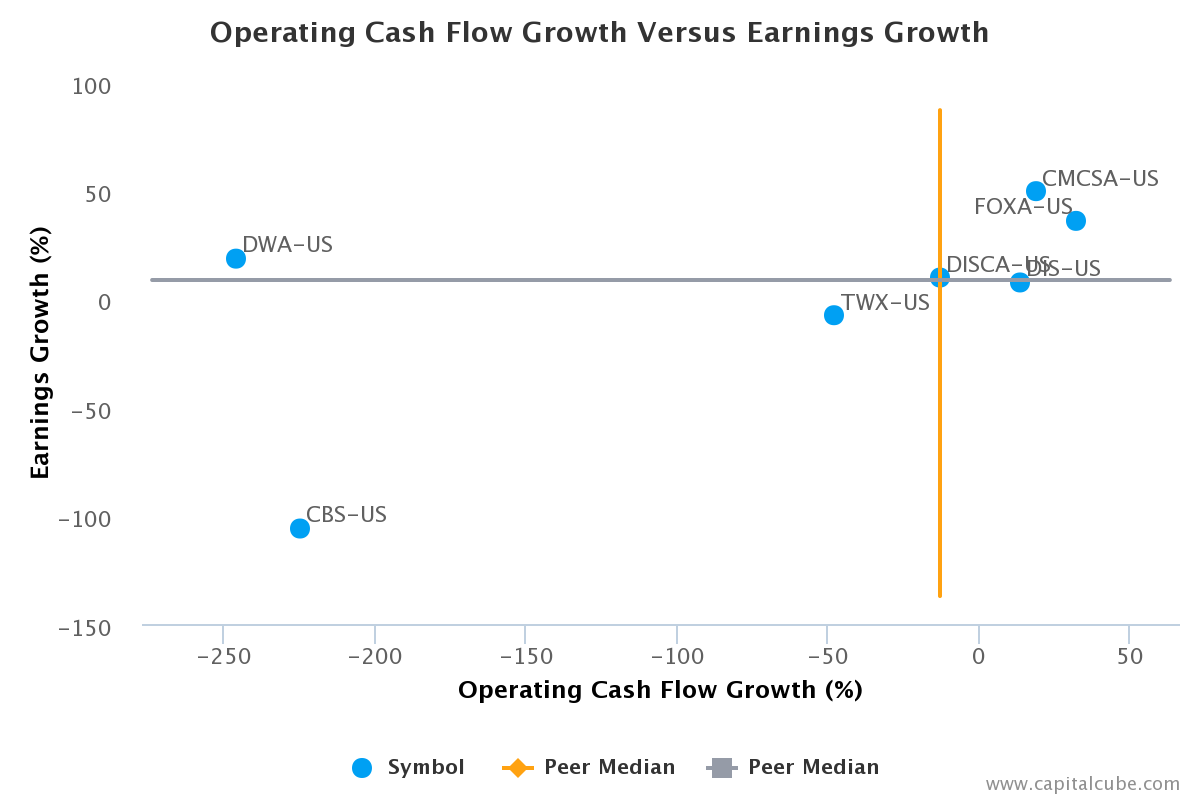 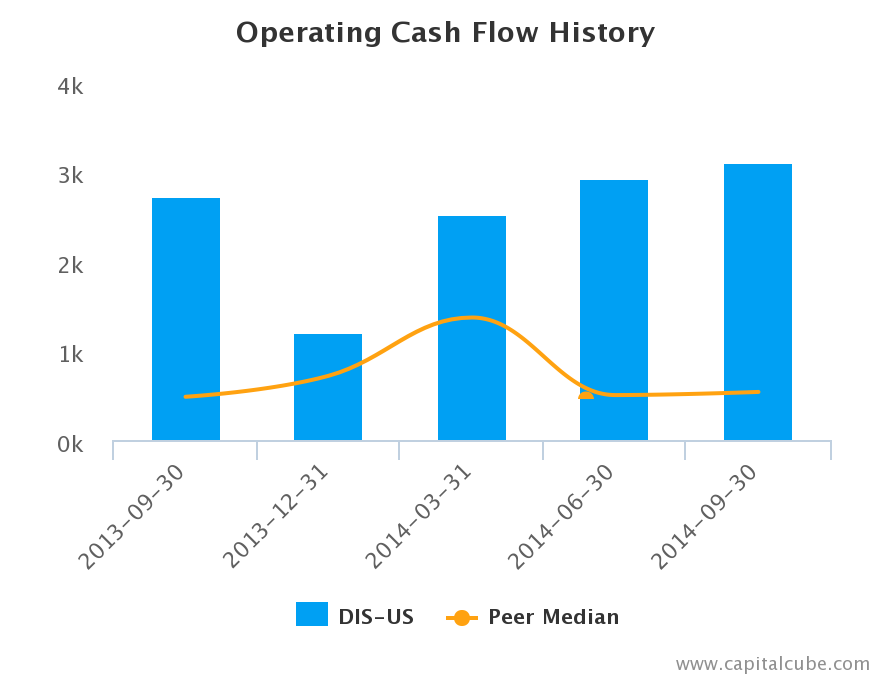 The company's earnings growth has also been influenced by the following factors: (1) Improvements in operating (EBIT) margins from 18.7 percent to 19.3 percent and (2) one-time accounting items. The company's pretax margins are now 19.9 percent compared to 19.2 percent for the same period last year. 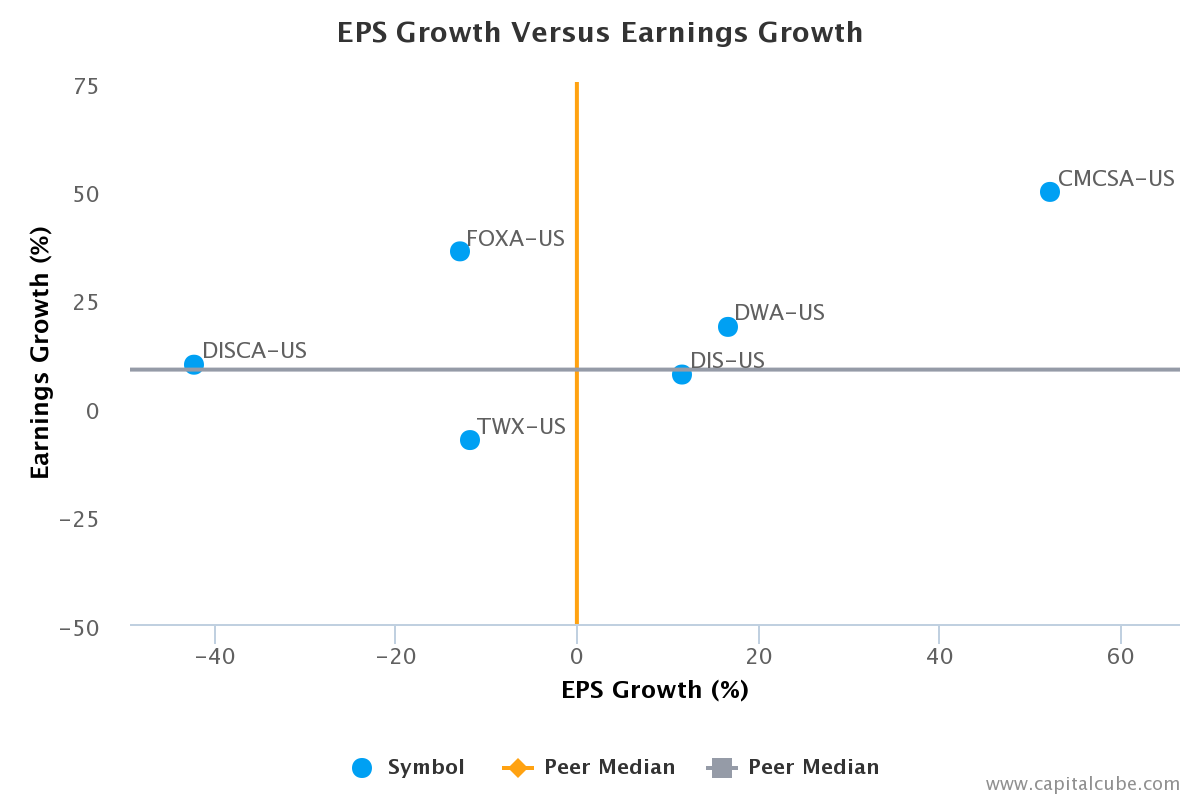 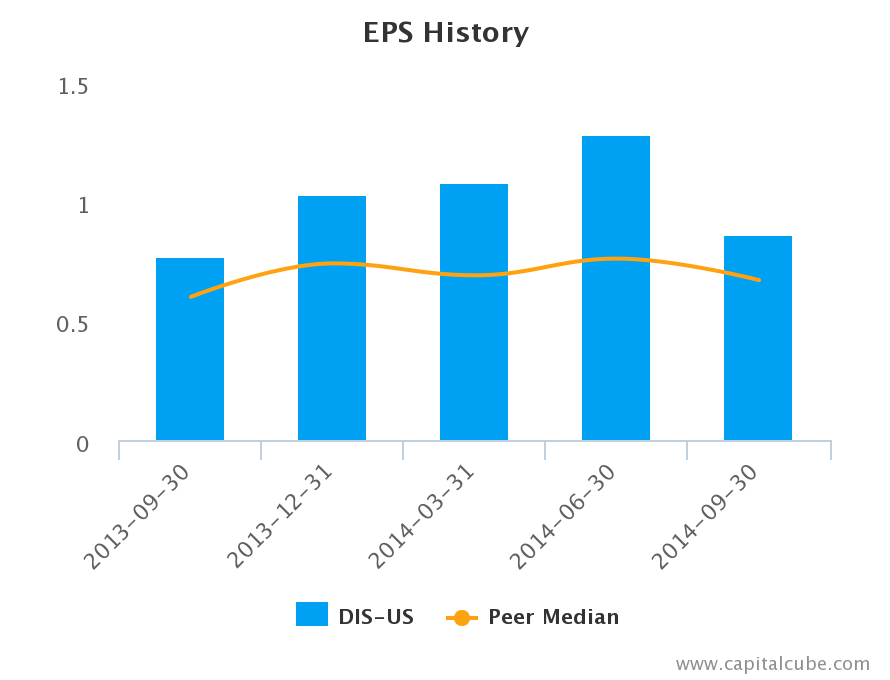 The table below shows the preliminary results along with the recent trend for revenues, net income and other relevant metrics:

CapitalCube does not own any shares in the stocks mentioned and focuses solely on providing unique fundamental research and analysis on approximately 50,000 stocks and ETFs globally. Try any of our analysis, screener or portfolio premium services free for 7 days. To get a quick preview of our services, check out our free quick summary analysis of DIS.https://online.capitalcube.com/#!/stock/us/nyse/dis