Filed under: Energy, This Built America

By Nicholas Duva
Climate-conscious Americans have long glanced enviously across the Pacific to China and its ever-growing number of often-gargantuan wind farms.

It turns out that they have less to be jealous about than previously thought: The United States has more wind energy powering its grid than any other country in the world, says a report by EDF Renewable Energy, the largest third-party provider of operations and maintenance for wind renewable-energy projects in the country.

Though China has more megawatts of wind turbines installed than the U.S -- about 90,000 to America's 60,000 -- the U.S. actually produces more electricity that is delivered to the grid, which in turn reaches more businesses and homes. And while China's wind industry delivered less than 138 billion kilowatt-hours in 2013, the U.S.'s delivered more than 167 billion.

That's 20 percent more than China. And the U.S.'s generation has been growing steadily since 2008, when it first overtook Germany to become the world's No. 1 producer.

America wins out due to a number of factors, says the report.

One is that the country's been blessed with outstanding natural wind resources. From the Great Plains to the coasts, the U.S. crucially has millions of acres of open space with high wind levels.

This fact alone explains why America has increased its lead in wind power over Germany, which has a total area less than that of Montana. China has plenty of open space with perfectly good wind-generation capability.

More stringent regulations on the building of wind farms in America may account for their success in generating power. Generally, projects can not be financed without an assurance of access to transmission features that deliver output to market. In addition, site choice is highly dependent on mitigation of environmental impacts.

In essence, American choices on where to build are usually safe, reliable ones-which means that U.S. wind projects installed since 2000 are of high quality. They are ready to operate more than 95 percent of the time when the wind is suitably strong.

The structure of government incentives has also encouraged production. The federal Production Tax Credit (PTC)-which expired at the end of 2013-could only be earned for kilowatt-hours produced and delivered during a 10-year period, which meant that capital investment itself was not rewarded.

The credit had been enacted in 1992 after years of developers making profits simply by completing projects, even without their wind farms operating at a high capacity. 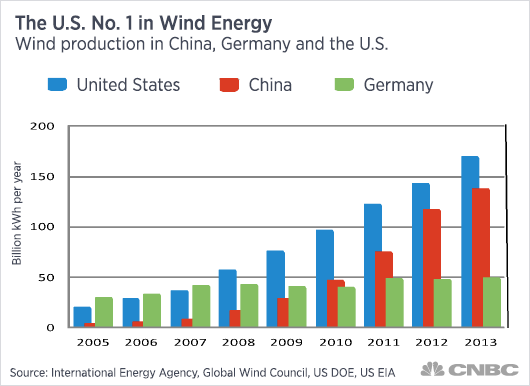 Leading America's charge has been Texas: In 2013, it generated almost 36 million kilowatt-hours, which can power more than 3.3 million households.

But perhaps America's most vigorous supporter of wind energy has been the land of corn, early presidential primaries and pig-slaughtering Senator-elects: Iowa, which produced 15.6 million kilowatt-hours last year, provides 27.4 percent of the state's electricity.

Since 2004, Berkshire Hathaway has spent over $5.8 billion on wind projects in Iowa, creating more than 64 percent of the state's considerable wind-generation capacity.

But the reason Buffett built so many wind farms may have expired in 2013.

"On wind energy, we get a tax credit if we build a lot of wind farms," said Buffett at a conference in Omaha in May. "That's the only reason to build them. They don't make sense without the tax credit."

Though the federal PTC expired in 2013, it technically remains in place for projects that began construction before January 1, 2014. But what does the future hold for the still-nascent American wind-generation industry?

An April report from the National Renewable Energy Laboratory predicted that, under a scenario in which the PTC is not extended and other policies remain unchanged, wind-capacity additions are likely to fall between 3 and 5 gigawatts per year from 2013 to 2020.

That's a stark drop from the average addition of 8.7 gigawatts per year from 2008 to 2012. Still, it seems that the tax credit (or something resembling it) won't be renewed anytime in the near future; Senator Harry Reid's attempt to extend the credit has already been thundered against by a coalition of conservative energy groups that seek to prevent a late passage in the lame-duck Congress.